The United States began its active involvement in Vietnam in the mid-1950s. Over the course of the 1960s, the war increasingly divided the American public. At home, thousands of Americans actively protested the conflict. On April 28, 1970, President Richard Nixon authorized American troops to enter and occupy parts of Cambodia, a country neighboring North and South Vietnam. Many Americans interpreted this military action as an escalation of the war.

The most well-known protest involving the Vietnam War occurred at Kent State University in response to Nixon’s announcement regarding Cambodia. On May 1, Kent State students held an anti-war protest. That evening several incidents occurred, from the lighting of bonfires to rocks and bottles being thrown at police officers. These events led to the closure of bars by local authorities before normal closing time to reduce alcohol consumption. In response, students and other anti-war activists committed acts of vandalism in the city of Kent. The mayor, Leroy Satrom, declared a state of emergency on May 2. He requested that Governor James A. Rhodes send the Ohio National Guard to Kent to help maintain order. Rhodes agreed, and the National Guard members began to arrive on the evening of May 2. As the soldiers arrived, they found the Reserve Officer Training Corps building at Kent State University in flames.

On May 3, approximately one thousand National Guard soldiers were on the Kent State campus. Tensions intensified on Monday, May 4, when classes resumed at the university. Anti-war protesters scheduled a rally for noon on the Commons, a centrally located campus green space. Attempts to ban the gathering proved unsuccessful. As the protest began, the National Guard fired tear gas at the demonstrators. Due to wind, however, the tear gas proved ineffective. Some of the protesters threw the tear gas canisters and debris from a nearby construction site at the Guard members, while some demonstrators also chanted at the soldiers. Eventually 77 Guardsmen advanced on the protesters with rifles and bayonets. Twenty-nine of the soldiers eventually opened fire. The gunfire lasted just thirteen seconds, and the troops fired a total of 67 shots. Four students were killed, and nine students were wounded. 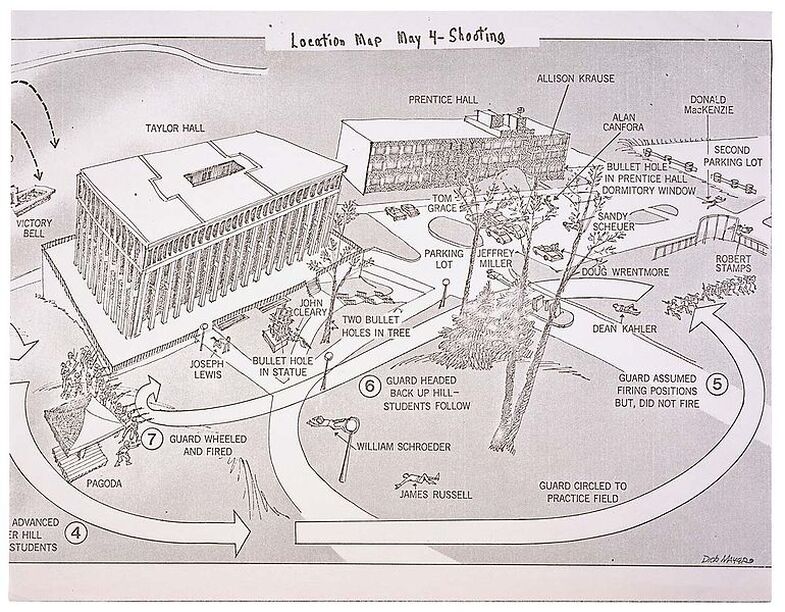 The President's Commission on Campus Unrest produced this map of the Kent State shooting.
​​​Kent State University immediately closed for the rest of the spring semester. In fear of similar violent protests erupting on their campuses, hundreds of colleges and universities across the country cancelled classes for the remainder of the academic year. The Kent State shootings—also known as the May 4th massacre—further affected public opinion. A Gallup poll taken the day after the shootings reportedly showed that 58 percent of respondents blamed the students, 11 percent blamed the National Guard, and 31 percent expressed no opinion on the incident.

A presidential commission issued a report in September 1970 that concluded that the Kent State shootings were unjustified. Legal action followed for several years. Eight of the National Guardsmen were indicted by a grand jury, though these charges were dismissed in 1974 by U.S. District Judge Frank J. Battisti. The following year, the victims and their families brought civil action for wrongful death and injury against Governor Rhodes, the President of Kent State, and the National Guardsmen. Their attorney sought damages of $46 million, and an eleven-week trial resulted in unanimous verdicts for all defendants on all claims. An appeals court later reversed that judgment on the ground that the federal trial judge had mishandled an out-of-court threat against a juror. Instead of going back to court, the state of Ohio settled the civil case in 1979 for a total of $675,000 to all plaintiffs.
​